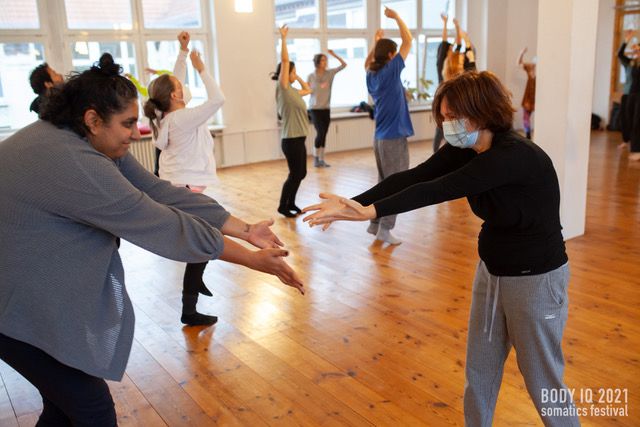 A review by Florian Filtzinger, RSME, ISMETA Board of Directors, Berlin, Germany

This November, the courageous and visionary team of four curators around Kai Ehrhardt – Founder of the Somatic Academy, Berlin and the BodyIQ Festival series – brought a pandemic-conquering and deep-tissue-touching festival to the field of Somatics. In six rooms, spread over four different venues, the curators invited more than 100 presenters to share their approach to Somatics, Activism and the Arts with an audience of peers and researchers but also the public. And not to forget: the parallel happening online program, to provide international participation in separate streams or hybrid formats of the offerings!

The audience included an international crowd of facilitators, artists, activists and first timers to one common ground and question of intersectionality between somatic inquiry, activism, the arts and critical observation of gender, race and accessibility of spaces.

One presenter Ann Lenore Moradian shared after her workshop Cultures of Fear,  “This was my first time coming to this festival, and I cry, I am so grateful to meet my community, to find you all, it’s the greatest asset for me: smart, brilliant minds and open loving hearts and bodies that are alike… It can’t get better than that. Each of us functions as cells and here we come together as an organism for a moment.”

Johanna Schumacher, one of the many volunteers helping to make this journey possible, mentioned: “This festival happens for me at exactly the right time and space; I was a bit lost in the world of bodywork and had the urge for more deepness. I had to get away from this at times ruling toxic positive, hedonistic and over-holistic approach to the field, and here I found the depth needed and a truly activist level to it.” 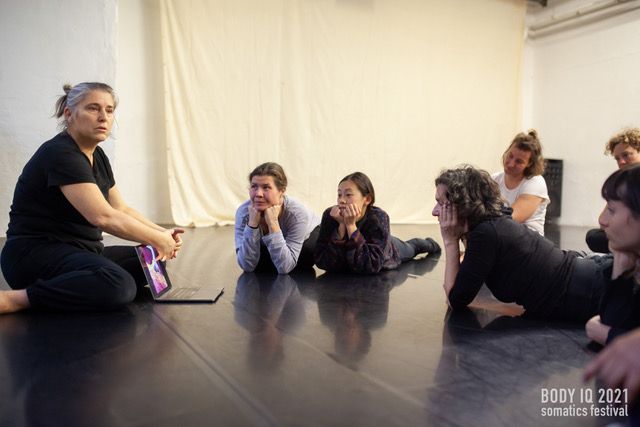 Truly at times it was hard to choose from the workshop offerings, which gave each participant the opportunity to dive into their current need or interest for deepening. For orientation and integration, at the beginning there were “landing offers” tailored to the needs of participants of color and trans* & non-binary identified folks. Axel Pedersen-Nielsen, the facilitator of one of these “arrival spaces,” made clear why as a trans-man this is so important: “With our welcoming space for trans* identified bodies we created a safety net, a bubble inside the bubble, which for me personally serves my poly-vagal-system in spaces, mainly still designed by and for cis-personalities. Connecting, grounding and one of the main intentions was to build bridges for queer bodies enhancing their experiences. And for me, social justice work and bodywork joining forces is an ongoing, inspiring forming I enjoy so much.”

There was also daily integration and a care team – with a room dedicated as a “nest” as Mäks Roßmöller, one of the curators proudly explained personally to every guest arriving. Besides this, each morning began with a profoundly warm hour dedicated for integration, hosted by Christa Cocciole.

Besides the official offerings, surely a lot of magic happened in the breaks and transition times: peers from all over the world had the chance to meet in the flesh and empower, educate and simply be with each other in much needed co-regulation!

Thomas Kampe, another one of the curators, said about the festival: “It was exciting to see the event as a forum for knowledge exchange between different communities – professional practitioners, artists and academics, with an exciting blend of practice explorations and theoretical reflections. At the same time, Body IQ managed to build more bridges and inclusive dialogues between diverse cultures and their distinct concerns. This included speaking to and acting from a broader diversity in ethnic, age and ability backgrounds, with participants from across the globe – so much needed in an often very homogenous somatic field. In that way, the event was very successful and satisfying to witness in its organic and complex unfolding.”

Some participants stated their overwhelm by the offerings, and how hard it was for them to “find a way through the enormous program” – as Petra from Switzerland shared. She felt like “all of sudden, one of the big online conferences was happening in person. I wished for more space in-between.” The visiting organizers from SOMA PRAGUE learned to not go hybrid in their planning, and rather focus on their live audience, when they will have the chance to run their festival again. Also, Dieter Rehberg from Vienna, one of the presenters, mentioned to have the focus rather on one more defined audience or topic, but he felt inspired to create peer-to-peer learning gatherings in smaller spaces. Though giving constructive feedback, I was witnessing all three with a warm smile on their faces -and sensed it in their hearts – in the touching and grateful closing circle on Sunday evening. This ending was followed by an online gathering four days later, to harvest and concretely aim for working out strategies of implementing the shared wisdom and experiences in our communities around the world.

Dr. Martha Eddy, former ISMETA Board President, shared with me over one of our daily Covid-19 tests prior to entrance: “I appreciate the representation of ISMETA in presenters, and how visitors are sharing that they are still watching videos from ISMETA’s own online conference last March. She felt a sense of ISMETA on European ground, as BodyIQ is an important European forum for the field of Somatic Movement Education & Therapy – bringing together international Somatic work that isn’t just dance, which has its own forums already, but in terms of Somatics in multiple applications, BodyIQ is really it!” She is ending her excited insight by getting a hug from a long-time only-online presenter from the US, wishing for both organizations to work even closer together in the future.

Blanka Lisa, from the Czech Republic, shared for us: “This year I could only attend BodyIQ for two days, Saturday and Sunday. Within this limited time, I felt how important it is to be with others, to sense them, to touch them, to connect and share. I am grateful for all online events happening, as they enable us to spread wisdom around the globe; however, BodyIQ, with many topics bringing different perspectives on how to use somatic movement to make things better and having the courage to provide on-site sessions, meant much more to me. I felt to be not only part of a somatic movement community, but also to be part of a somatic movement tribe… with its purpose, ancestors, stories and healing rituals. I was celebrating reunion at a tribe gathering with tribe members arriving from different parts of the world.”

I myself had the pleasure of co-hosting two program points, and the chance to bring online research developed during 1.5 years of online inquiry into in-person experiences. With much gratitude for the daring of creating this experience – with all the complications and needed security given this ongoing pandemic – for all involved. And to the not yet mentioned curator Angela Guerreiro: You brought Somatics in Action – as promised – and empowered our field to grow many steps closer and more united. Here’s to many more versions to come! 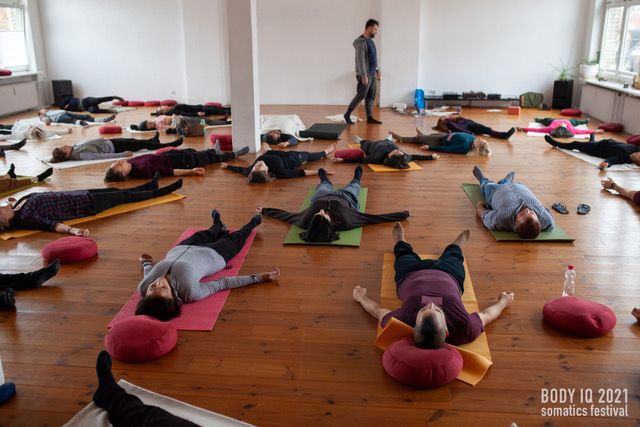