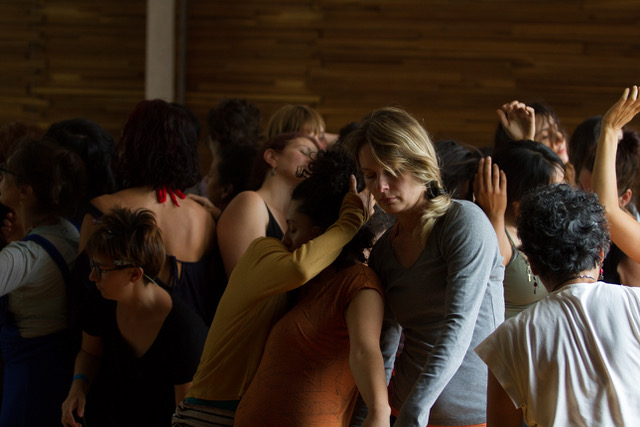 The first Encuentro Somático in Mexico, Celebrating Embodiment, took place from March 29 to 31, 2019, at the Centro Cultural Pedregal, in the south of Mexico City. More than 140 participants gathered from five countries (Argentina, Colombia, Spain, the U.S., and many regions of Mexico) with 34 teachers and performers representing many different somatic movement traditions, including the Alexander Technique, Authentic Movement, Body-Mind Centering, BodyMindMovement, Contact Improvisation, Eutony, Feldenkrais Method, Laban-Bartenieff, Movimiento Lógico, Rolf Movement, Sensory Awareness, Shin Somatics, Tamalpa Life/Art Process, Topf Technique, and yoga. The group included current ISMETA board members Bibiana Badenes, Maria Luisa Díaz de Leon, and Ryan Kennedy, and was organized by BodyMindMovement practitioners Julien Bourillon, Ivana Sejenovich, and María Vélez, with support from Maria Luisa, Rebeca Sitt, and myself. As a community we shared classes, performances, movement jams, meals, discussions, and movement explorations. The sense of common vision was extraordinary. The overwhelming realization was how the different disciplines complement one another: while observing the differentiation of styles and foci among the traditions was delightful, noting the practices that we have in common as practitioners and teachers was much more compelling.

Knowing that my experience was only one of 140 different personal trajectories through the weekend, here are some very personal highlights:

I felt the presence of loving kindness underlying the dialogue that we pursued together during the entire weekend as we moved, touched, witnessed, and learned together. I realized that a web of somatic movement practitioners is growing in México and around the world—and that the Encuentro Somático and  ISMETA are important nodes within that web. I hope that the loving web we are creating becomes the context both for growth of the field and the positive transformation that our collective work can bring to individuals and the world.

And of course the organizing team had a short but great afterparty with sushi, an appropriate amount of mezcal, dancing, and lots of laughter.